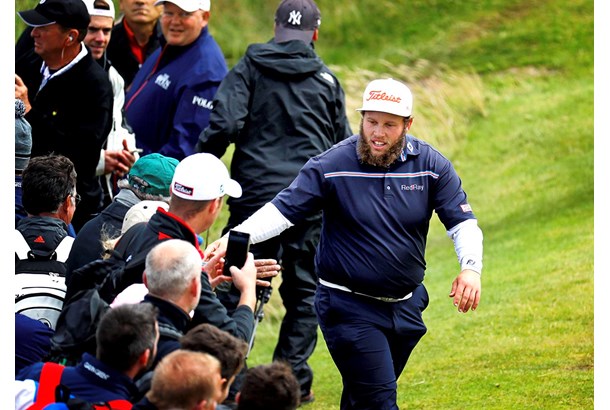 In his Today’s Golfer column, John Robins reveals all about his new project with Andrew ‘Beef’ Johnston.

In his exclusive Today’s Golfer column the broadcaster, YouTuber and Edinburgh Comedy Award winner explains how Beef’s Golf Club came about, what it’s like to have a professional golfer as his new best friend, and how you can become a member.

As every golfer will know, having a conversation about golf with someone who doesn’t play the game can be incredibly brief.

Person A: “How was golf today?”

Person B: “Started OK but short-sided myself on the 6th and chipped into the bunker. Should have taken a 60º but bottled it and knifed my sand wedge through the green so ended up with a triple. Then on the 12th…”

As someone who talks for a living on stage, on radio and on podcasts I’m limited to how often I get to talk about golf. I try where I can, but eyes glaze over, phones get checked mid-conversation and laughter inevitably runs dry. And [joke incoming] that’s just in the clubhouse!

So you can imagine my delight when I got a call from sports writer and erstwhile host of That Peter Crouch Podcast Tom Fordyce. The conversation went something like this.

And so it was that within a week I found myself talking about golf with someone who was not simply tolerating my anecdotes, but actively encouraging them. And that person was none other than bearded hero of The 2016 Open, Andrew ‘Beef’ Johnston!

That’s right, a new golf podcast has been born and I’ve got the best seat in the house (and my own parking space)!

RELATED: John Robins – “My swing has deserted me… and it’s all my fault!”

In Beef’s Golf Club, Andrew Johnston and I talk all things golf, whilst creating the perfect golf club with the help of you, the listeners. We deal with the really important stuff like what beers you’d want in the clubhouse, whether we should ban creepy portraits of ex-captains, and what the punishment should be for a faulty air gun when you’ve stepped off the course with shoes caked in half-a-ton of mud.

We’ve recorded five episodes so far, with the first one launching tomorrow (Tuesday, September 13), so go and check it out using the links at the bottom of this page. As a golf nerd, it’s been an absolute dream to spend so much time chatting to Beef. He’s genuinely one of the nicest guys I’ve met, and learning about each other’s golfing life has been really funny.

RELATED: John Robins – “How I halved my handicap in four months”

We’re light years away from each other in terms of skill and experience (I’ve never even played with a caddie, for example, so finding out how much they really drink after a round is as close as I’ll get to the clubhouse at Augusta). But even though our experience of golf is worlds apart (he will never know the thrill of finding a brand new Srixon amongst the range balls and pocketing it) our love of the game is no different.

So far the dream golf club we’re creating is in its early stages, but it has two courses, The Fillet which is a championship course (and a potential Ryder Cup venue if you ask me), and The Mince, a municipal course where so much of it is GUR that we actually pay you to play it!

But it has got me thinking about what I look for in a golf club. And the responses we’ve had from people on social media throw up a common theme: it should be welcoming and inclusive (well, that was second to ‘free beer’ but we’ve got to cover our costs).

I really think I sense a groundswell of opinion amongst golfers that they’d far rather be made to feel at home at a golf course, rather than know everyone has their shirt tucked in or is wearing the right kind of shoes in the right rooms.

I’ve spoken before about how golf is going to have to change its attitude to attract the next generation and retain the people who gave it a go in various lockdowns. One of the most baffling things we’ve discussed is why there is so much fuss about wearing caps indoors WHEN EVERY PROFESSIONAL GOLFER YOU EVR SEE IS WEARING A CAP!

If you tell off a junior golfer for wearing a cap in the clubhouse it’s easy to see why they might not only be put off returning but completely baffled to boot. Well, this is one thing that certainly won’t be happening in Beef’s Golf Club.

I can’t deny that the mid-handicapper in me is desperate to exploit this pairing for all the free lessons, Pro V1s and Pro-Am invites he can wangle, but, with Beef still recovering from an annoying thumb injury, all of that will have to wait until he is back playing on the DP World Tour. For now, the Tour’s loss is audio’s gain.

Anyone who’s watched anything Beef has done on YouTube, seen interviews with him, or had the privilege of meeting him at tournaments will know he’s the most down-to-earth person you could wish for. It’s like your friend who’s a right laugh just happens to play off +5 and hang out with Tiger Woods and Mark Wahlberg.

So expect to be heard from us regularly! You can send us your suggestions for your dream golf club, clubhouse commandments you’d like to see written in stone, or any questions you have for Beef about life as a tour pro to beef@crowdnetwork.co.uk, or follow us on Twitter and Instagram. We might even send you a free ball or two!

Plus you should look out for a very special collaboration between Beef’s Golf Club and Today’s Golfer later in the month – after all, the best golf club has to have Britain’s best golf magazine on its tables.

LISTEN NOW: You can listen and subscribe to Beef’s Golf Club on Apple, Spotify, and Google.

READ NEXT: Most Forgiving Drivers